London (Apr. 21, 2011) – Irisys, the global leader in infrared solutions, has won the Queen’s Award for Enterprise 2011. It is the highest official UK award for British businesses. The company was selected in the International Trade category because of its outstanding export achievements.

The full text of the award reads: 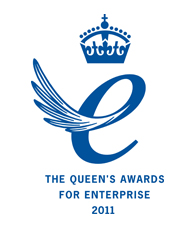 systems which are used for people counting, queue management, thermal imaging, security and healthcare applications. It started trading in 1996 and is winning the Award for increasing its overseas sales by 142% to nearly £12 million p.a. over three years, and increasing exports from 48% to 83% of its production. This outstanding performance has been achieved by exporting to more than 40 countries worldwide, using over 100 country based specialist partners, a comprehensive marketing approach and by pursuing new opportunities in North America and South America, China and Japan. The company invests double digit percentage of revenues in R&D, and holds over 70 patents.

Dr Ian Wilcock is Chief Operating Officer at Irisys. “We’re all delighted to have achieved this recognition,” he said. “It follows an exceptional year for us, when we more than doubled our turnover, opened more international offices, launched some innovative new products, and embarked on a major recruitment programme.”
Irisys was recently the subject of a BBC report, also focusing on outstanding export achievement.
About The Queen's Awards for Enterprise
The Queen's Awards for Enterprise is an awards programme for British businesses and other organizations which excel at international trade, innovation or sustainable development.

To be awarded the Queen's Award for Enterprise in the category of International Trade, a company must show a substantial and sustained increase in export earnings over three consecutive 12-month periods, to a level which is outstanding both for the products and services concerned; and for the size of the organisation. Awards are made on the advice of the Prime Minister after examination of applications by an Advisory Committee composed of leading individuals from industry, commerce, trade unions and government. The awards are conferred by the reigning British monarch on their birthday every year. For Elizabeth II, this is 21 April.

Winners are allowed to use the Queen's Award emblem in advertising, marketing and on packaging for a period of five years. Winners attend a garden party in July at Buckingham Palace, and are visited during the year by a Lord Lieutenant, the Queen’s local representative, to present the physical award, a crystal chalice.
For further information contact:
Dr Ian Wilcock Irisys Tel: +44 (0) 1604 594200 E mail: ian.wilcock@irisys.co.uk Website: www.irisys.co.uk